Empidonax minimus
Passeriformes
Members of this diverse group make up more than half of the bird species worldwide. Most are small. However their brains are relatively large and their learning abilities are greater than those of most other birds. Passerine birds are divided into two suborders, the suboscines and the oscines. Oscines are capable of more complex song, and are considered the true songbirds. In Washington, the tyrant flycatchers are the only suboscines; the remaining 27 families are oscines.
Tyrannidae
Unlike most passerines found in North America, flycatchers are suboscines. Suboscines have a simpler syrinx (voice box) than the oscines (songbirds), and hence have less-developed and less-elaborate songs. Their song is innate, and does not contain a learned component. The flycatchers are the only suboscine passerines found in North America north of Mexico. Nearly all suboscines (and all Tyrannidae) are native to the New World, and they are much more numerous in the tropics, where several other families occur in addition to the Tyrannidae. Flycatchers are named for their foraging style. They sit quietly on a perch and dart out to grab a flying insect from the air, and then return to their perch to wait for the next meal to fly by. Many also forage by hovering next to foliage or over the ground. Most have a distinct, upright posture and a slight crest. They have small feet as they do not typically walk or run on the ground. Most flycatchers are monogamous. The female generally builds the nest, incubates the eggs, and broods the young, although both parents feed the young. Flycatchers of the genus Empidonax pose many identification challenges for birders. Range, habitat, vocalizations, and behavior must all be taken into account to distinguish between members of this group.
Rare summer resident, mostly east.
Source of Bird Audio

The Least Flycatcher is the smallest flycatcher found in Washington. Like other confusingly similar Empidonax flycatchers, the Least has two white wing-bars, a white eye-ring, olive upperparts, and yellowish-cream underparts.

Least Flycatchers are found at lower elevations in deciduous or mixed woods, often along rivers. They breed in semi-open, mature, and maturing woods. It has been suggested that Least Flycatchers require large tracts of forest to thrive.

On breeding territories Least Flycatchers are aggressive to intruders, both their own and other species. They are known to attack Brown-headed Cowbirds, and the low rate of cowbird parasitization of their nests seems to indicate that their defense is effective. Least Flycatcher territories are often clustered together.

This species forages by flying out from a dead branch and catching insects in the air. They also glean insects from leaves. They tend to forage from the high shrub-layer up into the canopy.

Male and female select the nest-site in an upright fork of the lower-to-middle section of a small, deciduous tree. The female builds a cup-nest made of bark strips and fibers, grass, plant down, and spider and caterpillar webbing. She lays four eggs, incubating them for fourteen days. Both parents feed the young, who fledge at about fourteen days.

Atypical of most migratory birds, adult Least Flycatchers migrate south before molting in the fall. First-year birds molt before and during migration. Some populations appear to head east before they turn south to Mexico. Males arrive on the breeding grounds in the spring ahead of females, but no significant difference has been found in fall movement. They return to Washington in late May and leave by mid-August. Adults spend a very short period of time on the breeding grounds, only about two months. The entire time is needed to raise a single brood.

Least Flycatchers are widespread and common throughout most of their range. However, Washington lies on the western edge of the range, and therefore Least Flycatchers are uncommon here. They are not found breeding in urbanized areas. They have been known to shift territories into the forest interior in response to disturbances such as logging. This suggests that large contiguous forest tracts with limited disturbances are required for this species to remain common.

Least Flycatchers are the least commonly occuring Empidonax flycatchers in Washington. They are found in Eastern Washington in forested habitat, especially in aspen groves. The best place to see them is Okanagan County. West of the Cascades there are only a few records, but at least two singing males have been reported in recent years. 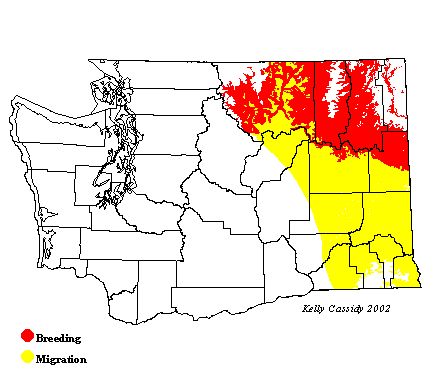